How Inbox Zero changed my life 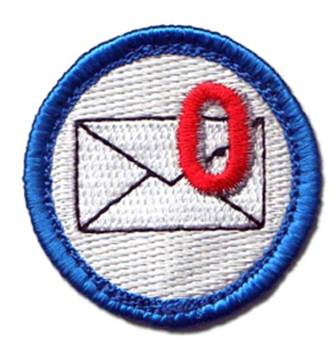 GTD is simple, yet often complicated to explain to newcomers and hard to practice. I usually find, that when explaining GTD to people – I always start with Inbox Zero – since Inbox Zero was the real eyeopener that changed my (work) life and really opened my eyes to all the benefits of Getting Things Done.

Rewind to the beginning: I’d been trying to implement GTD in my work life. I did get that the world throws you “stuff” and if you don’t process it, it just remains nagging “stuff” in the corner of your conscious mind. Taking up space that might be used better and more creatively.

But nothing had prepared me for the silence that spread in my mind the first time I looked at my completely empty inbox.

…and for the first time I *really* got that GTD metaphor “mind like water”.

When I’d had that rush of euphoria a few times, I examined the flip side of that experience, and it was stunning: THAT much joy caused by sheer relief? That really implies email is a world of pain! What a paradox: Communication, supposed to make our lives easier – but in fact torturing us all… So by realising how much pain I was in – I realised what a great relief I could award myself by getting my “stuff” processed using GTD.

What makes Inbox Zero such a great eyeopener to the benefits of GTD?
Fact 1: No-one kids themselves that they’re managing email well (to survive, most of us have to tell ourselves that were dealing with the non-email stuff pretty efficiently). But for email most people consciously realise that email is an eternal source of general pain, and would love to change that.

Fact 2: In life it can be hard to recognise a delegation of a task when it happens [say a colleague asking “can I borrow equipment X on the 29th of May?”] and it can be really hard to define the best “next action” to get it done [with equipment X being out on loan indefinitely to person Y and Z, of whom Y is the one you’re in communication with, but he may be off on paternity leave] …And if in doubt, well.. it’s not for another month anyway, so it would be easy to postpone determining the next action. And then possibly forget.

An e-mail literally shows up in one of your physical (even if it’s on a screen) inboxes. It’s even labeled “inbox”. And with a tiny bit of GTD-training, that in itself posts a flag that the next action MUST be to “determine what kind of stuff it is, and process” – and then you’re already on the magic yellow brick road towards the land of stress-free productivity. Once your inbox is zero, it’s never hard to process the “next action” for that new email coming in!

In case you think I’m just some kind of Übermensch living in GTD-zen at any given moment – think again. But the really big difference is I now know exactly where my nag-stuff is; the stuff that needs complicated answers, lacks info (or whatever else makes me postpone them), it’s in my “postponed”-folder. A folder I tackle when I’m ready, and have time to sort out, what’s what. I no longer have to look at the mess of “the one with the attachment I need for wednesday” or “the one with the registration key for that program I may need to install again someday” not to speak of “that email from a dear friend I’m never getting around to answering” every single time I get a new incoming mail.
This means I no longer postpone processing my new incoming email out of fear of having to look at all those nagging mails again, wondering and worrying about when I’ll get time for those tasks, and what needs to be defined for me to get them done. I can do that when I have the time and the guts for it!

No longer living with the white noise of the mind (from suppressing the nagging knowledge, there is stuff I should attend to somewhere at the bottom of my inbox) – I know the incoming emails have to be processed. And I do it almost effortlessly by now: delete, archive, defer or (if in doubt): just move to “postponed” folder, with the  calm certainty, that I will deal with it later.

And in turn all that practice from processing emails makes it so much easier to process and define “next actions” for the real life “stuff” that life dumps on you, without the label “inbox” written all over it. Like in the example above, which was a case of life-dumps-stuff from yesterday. A year or two ago it would have ended up part of the nagging white noise of undefined things not-yet-done. But yesterday I got the next action done immediately with one email: to Person Y, who might be able to answer if they’d be done with equipment X on the given date – and cc to the colleague still standing next to me asking the question (that was a less-than-2-minutes-task I could do right away!). And within the hour I had a reply back from Y saying they would still be using equipment X until mid-June, so that was a “No” – cc to the asking party. A quick thank you to him, and my job was done! It never even made it into my Omnifocus task-managing system.

Now does this sound wonderful? Then watch Merlin Manns Googletalk on inbox zero to get you started, and start flexing you GTD-muscles and hone your processing skills with Inbox Zero – and you too will be on the yellow brick road to the land of stress-free productivity, freeing your mind from clutter and making room for creativity!

PS: If you’re on the path already: stop procrastinating by reading about GTD in stead of doing it: Go empty your inbox, tackle your postponed folder and do 3 tasks now!
Or if you’ve been good already – go buy yourself a Nerd Merit Badge to show for it 🙂