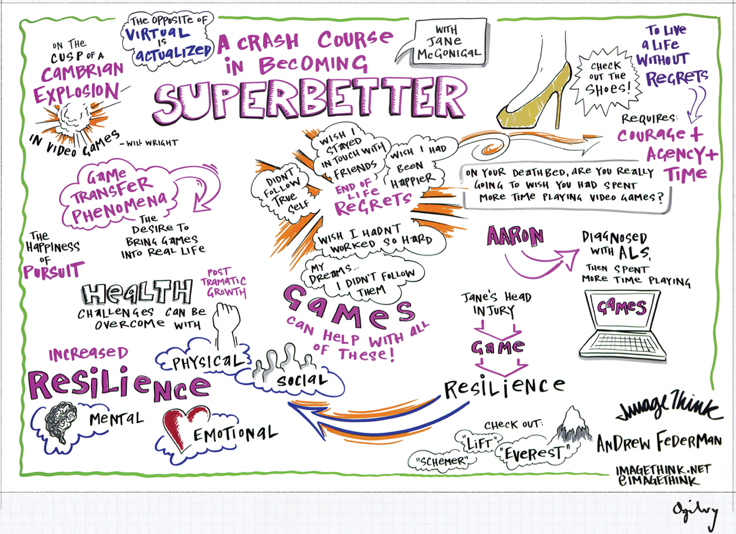 She takes the stage like the wonderwoman of the gaming world, that she is – in an intricate dress of blue over pink. In supercrazy high heels. She starts by pointing out how she likes challenges, so the shoes are a challenge for herself: Complete her talk wearing them, and not falling over. Oh and she also promised all of us in the room 7 and a half minutes longer lifespan!

McGonigal is famous for her ideas about harnessing the skills and powers of the gamers of the world to make it a better place, in her book Reality is Broken – or her TEDtalk on the topic. Her appearance at #SXSW2012 was a talk about becoming SuperBetter (and a launch of the App/Gamesite for playing the game). Back in 2009 she had a concussion – and the treatment is lying still for around 3 months. No reading, no gaming, no tv, no moving around, no computer… Basically: Do nothing, have no entertainment – no wonder the suicide rates for concussed people are three times higher than average. McGonigal felt her choice was to either kill herself, or turn it into a game – so she came up with Jane, the concussion slayer (guess the inspiration). The video she made later, explaining the game, got so much response from people who had used  it to make their live quality better, she wanted to make it more easily adaptable to the multitude of possible uses – so she’s now made SuperBetter in cooperation with university researchers. It’s tapping into the knowledge about post-traumatic euphoria, and all about building up resilience – since all research shows, that this is key to surviving (almost) anything. Physical, social, mental and emotional resilience. Superbetter can help you do that, within whatever field you want to focus on. And yes, it’s free. There’s no excuse – go get SuperBetter right now!

Ogilvy Notes did these pretty visual notes of the talk: A Crash Course in Becoming SuperBetter – Jane McGonigal @ SXSW 2012.
Oh, and in case you’re wondering: McGonigal leveled up without a hitch – no falling over in her heels, not even wobbling along the way.