I know where you’re going next spring! 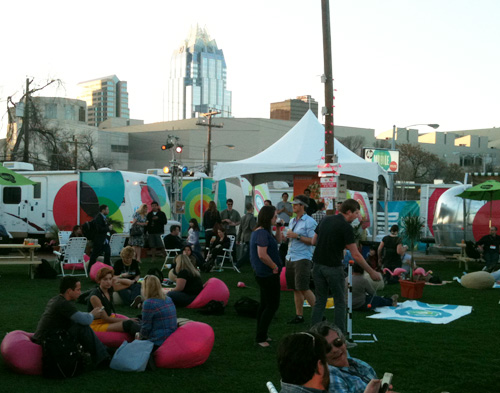 If you’re into tech and how we humanoids interact with it and how we interact with other humanoids through the interwebs, then there is only one place to be, when March rolls around: right here in Austin, Texas where the geeks gather for SXSW Interactive.

But what makes around 20.000 tech geeks from all of the US and most of the world mill around endlessly for 5 days, or in other words: What makes SXSWi so darn cool? Well I was wondering the same thing – and my best answers are:

The SXSWi-participants are the cream of the crop of early adopters from all fields touching on “interactive” – and they’re in town at the same time as the film industry and the music biz. Does it get more interactive than that? Hence it’s the perfect place to launch your latest invention and create hype – Twitter and Foursquare were famously launched at SXSW – and anyone dreaming about doing the same comes to Austin in march.

But SXSWi is not just a market place – it’s a community of like-minded geeks: An artist were tiredly handing out flyer #31578 saying: “I do art based on visualizations of tweets” then perked up and with a broad smile added: “And I love being here, where people actually understand, what that means”. Any and all sessions I’ve been to, were talking to the audience as equals. None of the “it’s sorta like that thing on the top of Facebook” – just straight off to the future – or into the deeper implications of our current practice. Now that is a rare luxury away from the normal world of “does everyone know what Twitter is?” and allows for things to get discussed at a completely different level. Connecting the dots – rather than explaining dots one and maybe two…

It’s not just death by powerpoint – other formats are in use: interviews, using the the audience and their considerable knowledge for focus group-like sessions in the “core conversations” Let’s face it: fitness 3.0 gets a little more real, when the Nike+ team pipes up with their opinion. And the sketchnotes were creative and beautiful – see them all at: http://ogilvynotes.com/

And finally – if the consecutive 10 to 20 tracks for 4 and a half days plus special events etc. had been going on in a wired city like NYC my guess is it would have been a stressfull event (and I’m a city girl!) – but here we were, all 20.000 of us chilling in the sunshine of the Austin spring – being passed by bumper stickers urging everyone to “keep Austin Weird” – how can you not stay cool and enjoy the show?

And finally SXSWi is about your favorite topics – you pick and choose your own favorite mix in the tech-candy store, so everyone comes home from a different SXSWi – My take on the trends from SXSWi 2011 is different from seeing it through the eyes of a designer (naturally she did a nice sketchnote too), and from the publishing business there were other ideas and trends to take home – or check out Thomas’ description of his journey into the magic land that is SXSWi…

Were you at SXSW Interactive? What was your experience?
And was I right – are you going to be in Austin when SXSWi 2012 kicks off on marts 9th?