‘t was the second day of the show, and of Technology in Higher Education – and there was lively debate in the #BETTarena

Schools and Real Computer Science (Simon Peyton Jones, Jo Twist & friends: Roger Davies, Nicki Maddams, Charlotte Avery) tackled the challenge of getting more kids interested in programming. Visual programming languages was a way in: like Kudo Letting kids make games by combining visual elements (actions, parameters etc.)
To inspire the girls – who are desperately needed in IT: Geeky Barbie travels the world (along with her boss Nicki Maddams aka @GeekyNicki and talks to inspiring women in IT (on Facebook as well) – check it out and spread it to the girls out there!
The wifi had improved – so I actually had the chance to tweet for a while (and catch up on the situation(s) at work…)

Big ideas in Education was the heading of the next BettArena session (Not sure I found the name apt, but it was entertaining)
Now I’m not British (nor living here), so I hadn’t heard of “the country’s worst head teacher” (apparently something one could have seen on tv or read about in one of those paper things called The Daily Fail.) But Vic Goddard uses his “title” to promote teaching – and his energetic sales speech for the teaching profession was only topped by his own “YouTube guest speaker” Tailor Mali’s amazing Poetry Slam answer to what Teacher’s make:

Later on Robert Mullins (Raspberry Pi) and Bill Liao (coderdojo) were talking about invigorating the computer curriculum – so it was a day with lots of debate about teaching actual coding skills and what this means for teachers.

Personally I needed to recharge – so I got off the buzzing BettShow floor and it’s crazy noise level – AND got to plug in my dying gadgets upstairs at the Higher Education track. And there was a wealth of interesting inputs to be found:
I caught half of Richard Boulderstone‘s “Cross Platform support for mobile devices – about the British Library’s adventures in the world of apps.
Richard Hall had another tale from the trenches that is technology in educational institutions: Making-the-cloud-work-for-you-institutional-risk-and-governance (on slideshare) I especially liked this slide: 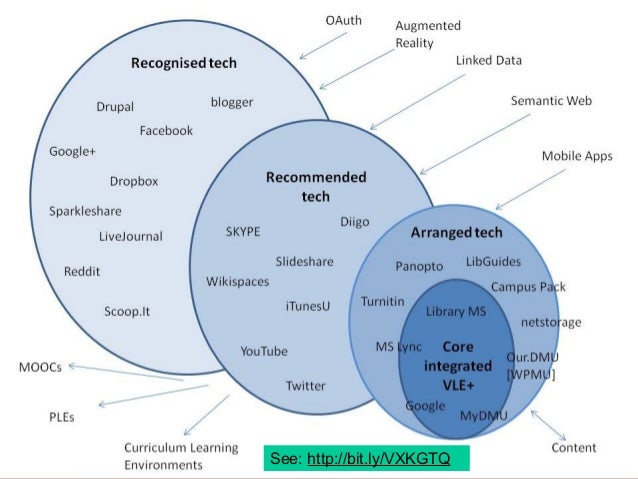 Finally someone talking about ALL the categories of services we use – including the ones on the left, which institutions tend to just ignore (and for some at least) hope they’ll go away, if we ignore them?

Marieke Guy from the Digital Curation Centre talked about a problem no one adresses enough yet: Improving access to research data. Important topic both regarding the benefits and problems of opening up data, but also more practical matters of storing and sharing data. Anyone with an interest in the topic, should look her up, as well as the DDC.

Meredith Henson from Catalyst pushed open source to the masses: Open-source learning: Encouraging academics to share content (should be on slideshare?!) – as a WordPress evangelist myself, I couldn’t agree more with her – also on her warning about customizing to death until you can’t upgrade…

All sessions I never knew I really should go to – and all because I was out of power… And well because the BETT app has rather sparse info on the sessions. No description, just the title for most sessions – which doesn’t always reveal the gloriousness of the content (there #bettshow, feedback for next year!)

Before my brain melted I toured the floor again, heard a bit of a demo with @stephenheppell – pointing out the sad lack of correlation between doing good on STEM topics in PISA tests and interest in pursuing the fields. Countries doing good in PISA has little interest – and Mexico being the odd one out: They do very badly on the PISA, but would love to go into the field 😉 Lots more from Stephen Heppell here.

(Next update from #Bettshow will be my photo series of fun stuff and WTF experiences (some overlapping!) from the land of gizmos, free candy and neverending leaflets)